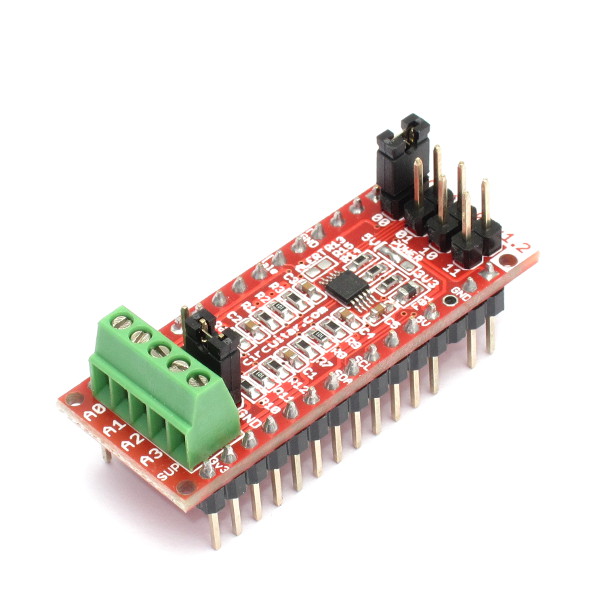 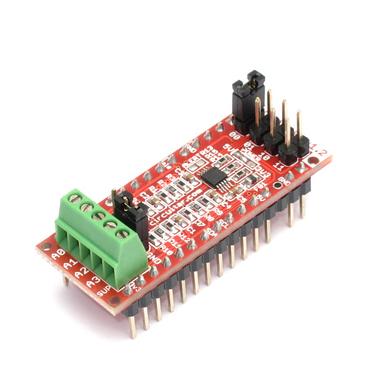 Module for measuring sensors with output from 4mA to 20mA

The ADC 4-20 Nanoshield offers a solution for applications in which it is necessary to measure sensors with 4mA to 20mA output with high precision and resolution.

The ADC 4-20 Nanoshield features a screw terminal with 4 independent analog inputs. They are named A0, A1, A2 and a3. To each input the output terminal of the corresponding sensor must be connected.

There is also a fifth signal present on the screw terminal, named SUP. To this pin the other terminal of the sensor (responsible for its power supply and the full current loop) must be connected.

The following sections show the two ways to connect the sensor.

!Sensor being powered by only one power supply

In this setup, the power supply to Arduino is the same that powers the sensor. In order to use this setup, it is necessary to close the configuration jumper SUP on the VIN position. This way, the supply voltage (called VIN on Arduino) is directly connected to the SUP terminal on the screw terminal and powers the sensor directly.

The figure below shows how to do this setup.

Unlike other modules that are devoted to measuring sensors from 4mA to 20mA, the ADC 4-20 Nanoshield features a low resistance value in order to convert the current to a voltage level that can be read by the ADC. This value is 150 Ohms, causing a voltage drop of only 3V on the resistor in the situation in which the output current of the sensor is maximum (20mA).

This means less losses and a greater amount of the supply voltage can be used to power the sensor. It you are using a 12V power supply, for example, 3V is lost on the resistor and there are still 9V available to power the sensor. A lot of sensors on the market are specified for being powered by 8V or more, being it possible to use them along with a standard 12V power supply.

!Connecting the sensor with an independent power supply

In order to use this setup, it is necessary to close the configuration jumper SUP on the GND position. This way, the SUP terminal of the screw terminal becomes directly connected to the GND of the module, serving as the return of the current on the loop.

The figure below shows how to use this setup.

Connection of the sensors powered with an independent power supply

!Connection with Arduino + Base Board Uno

The easiest way to use the ADC 4-20 Nanoshield along with an Arduino is by using a Base Board Uno or Base Board L Uno. You just have to assemble the boards and then load our sample code in order to check the system working (see the sample code section at the bottom of the page). This assembly can be used with Arduino UNO, Mega R3, Duemilanove, among others (contact us in case you have doubts about the compatibility with other versions). The figure below shows how the setup looks like. 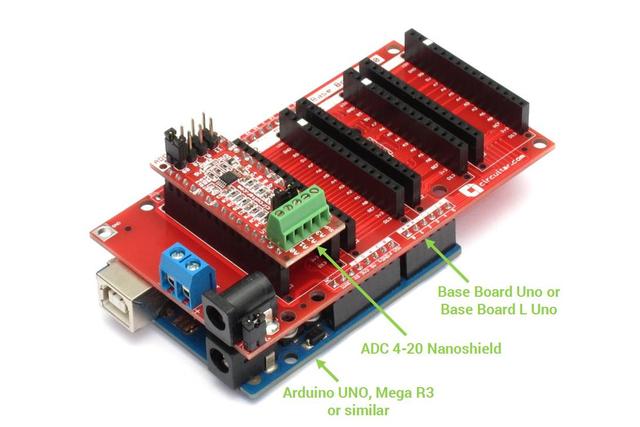 It is also possible to connect the ADC 4-20 Nanoshield directly to our Arduino-compatible board, the Base Boarduino. The connection is done the same way as with the Base Board, such as illustrated below. You just have to assemble the boards and then load our sample code in order to check the system working. (see the sample code section at the bottom of the page). 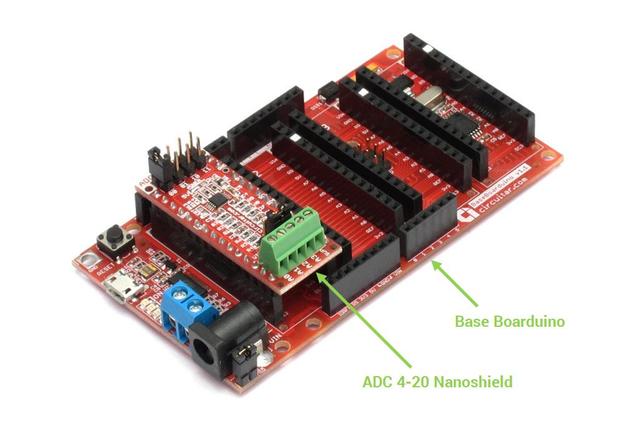 It is also possible to use the module with direct assembly, using a breadboard and jumper wires for the connection. Use the following schematics in order to connect the ADC Nanoshield to an Arduino UNO or Arduino Mega. 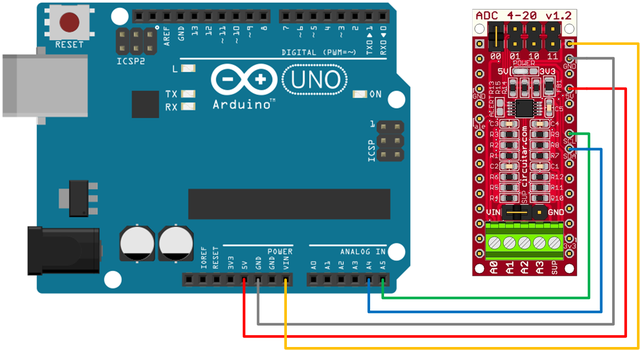 Connection using an Arduino UNO (click on the image to zoom)

Connection using an Arduino MEGA (click on the image to zoom)

Each module that is connected to an I2C bus needs an unique address, so that the modules won't cause conflicts among themselves. The ADC Nanoshield features 4 address options that are selectable via jumper on the upper part of the board, allowing up to 4 modules to be used at once, totalling up to 16 independent channels and using only 2 pins of the microcontroller. The figure below shows where the address selection jumpers are located. 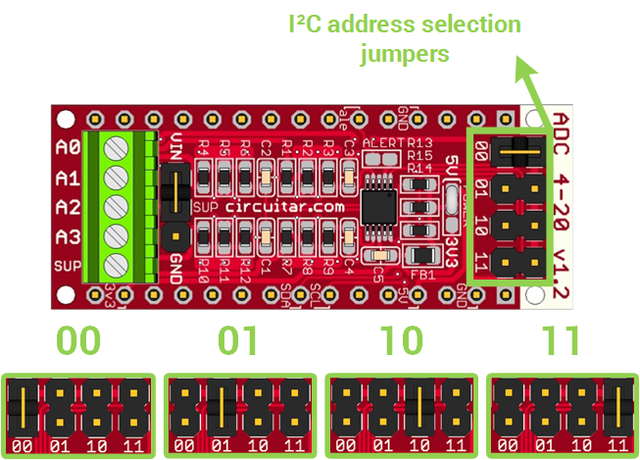 The figure below shows a setup of 4 modules that are being used at the same time. In this example, we use a Base Board UNO along with an Arduino Mega. 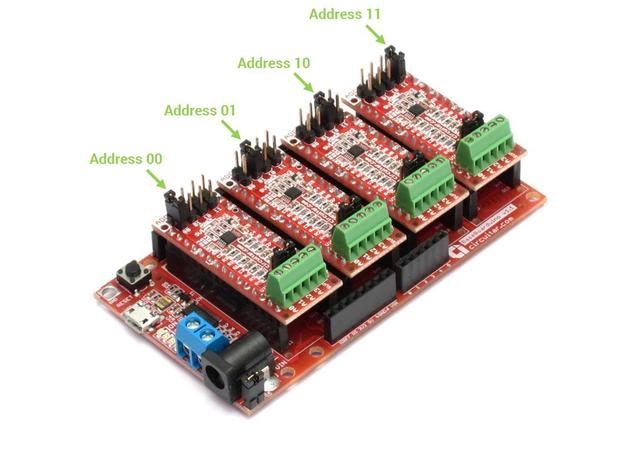 Using various modules at once (click on the image to zoom)

The ADC 4-20 Nanoshield can also be configured to work with 3.3V power supply. This configuration is useful when one wants to use the module along with other boards that work with 3.3V, such as Arduino Zero, Arduino DUE, among others.

In order to change the module’s operating voltage, it is necessary to change the solder jumper called POWER, which is located on the upper part of the board. The figure below shows how to change it: 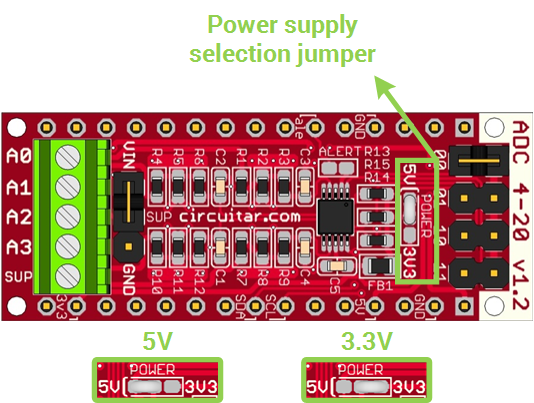 This change is only necessary if the module is being used along with the Base Board or Base Board L. In case you are using the module connected by jumper wires, you only have to connect the module’s VCC pin directly to the power supply of 3.3V.

Circuitar can send your modules pre-configured. Contact us for more information.

The chip features a programmable internal comparator that can be configured to generate an alert when the voltage value on the analog input exceeds some certain limit that was previously configured by the user. This way, the module can “warn" the microcontroller about a desired event through an interrupt, thus not being necessary to keep measuring the input continuously.

The alert signal is sent over pin 3 on Arduino (on the ADC Nanoshield, this pin is named “ale”). This function comes factory-disabled and in order to activate it, it is necessary to close the solder jumper named ALERT, which is located on the upper part of the board.

The ADC 4-20 Nanoshield communicates with the processor over an I2C bus, which uses only 2 pins. The block diagram below illustrates how the module works. 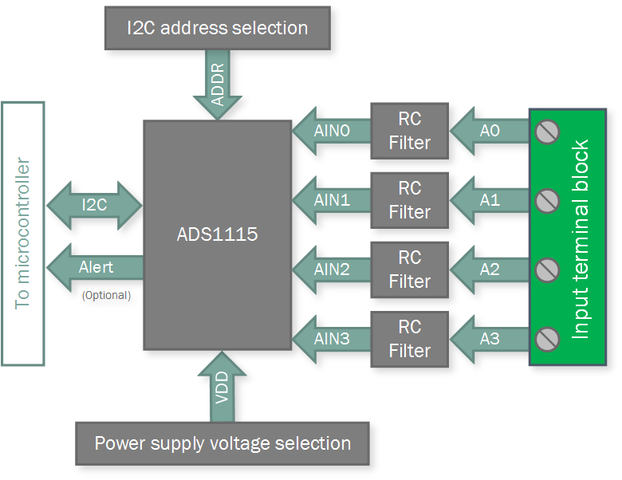 Block diagram of the ADC Nanoshield

Each input on the ADC 4-20 Nanoshield features a low-pass RC filter with cutoff frequency at about 480Hz. The filter features the functions of anti-aliasing and noise reduction on the analog inputs.

The table below describes the function of each of the used signals, as well as the correspondence with the pins on Arduino UNO and Arduino MEGA.